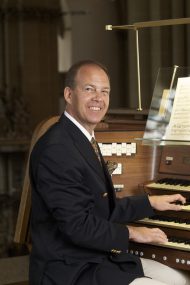 Stefan Kagl was born in Munich in 1963. He studied the organ with private music teachers, including amongst others Peters Schammberger, then he studied at the “Staatliche Hochschule für Musik” in Munich in Prof. Klemens Schnorr’ s organ class, at the “Schola Cantorum”in Paris and at the “Conservatoire Supérieur de Paris (CNR)”, with Jean Langlaisand his wife Marie-Louise.

He graduated with the “A”level examination of sacred music, the “Künstlerisches Staatsdiplom Hauptfach Orgel” in Munich, the “Prix de Virtuosité (mention Très bien)”, the “Premier Prix d’ Orgue” and the “Prix d’ Excellence” in Paris.

In 1991 Kagl won the first prize in the International César Franck Competition in Haarlem/Netherlands and launched into intense activity as a concert organist in Germany and abroad; in the course of this he gave the first performances of several compositions by his teacher Jean Langlais and made some CD (Charles Tournemire and Jean Langlais recordings with the label “Motette” and the complete organ works by John Ireland with the cpo-label and recently in Switzerland a new programme “Russian Dreams” with organ transcriptions of Borodins Polovetsian Dances and Mussorgskys Pictures of an Exhibition) and broadcasting recordings.

In addition to his work as an organist and director of music in Bad Kissingen from 1991 –96, in the same position at the two main churches of Rudolstadt 1997 – 2002 he has written a large number of articles, lectures and radio features on Jean Langlais and French organ music. At present time he holds the post of organist and director of music at Herford Minster and he is the artistic director of the festival “Herforder Orgelsommer” and is teacher for organ and improvisation at the “Hochschule für Kirchenmusik Herford”.