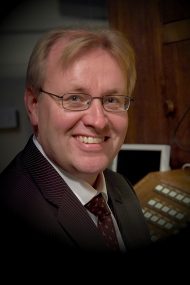 Markku Hietaharju achieved his A-exam in organ at the Sibelius Academy in 1986 and gave his first concert in the Cathedral of Helsinki the following year. He has supplemented his studies on several master courses in Finland and abroad. In 1988 – 1990 Hietaharju studied at the Music Academy of Lübeck with professor Martin Haselböck as his teacher and concluded his studies with a Konzertexamen.

Besides several concerts in Finland, Markku Hietaharju has performed numerous concerts in Scandinavia, Central Europe, the Baltic countries, and Russia. Among international festivals, Mr Hietaharju has been guest in Scandinavia, Baltics, Russia and central Europe. He has placed himself in the winning team at international organ contests.
Mr Hietaharju has been soloist as well as one in a chamber ensemble on several records (e.g. recording of the complete sonatas by A.G.Ritter in the Cathedral of Riga). In 2013 he performed Louis Vierne´s Six symphonies in six days in Turku Cathedral.

Mr Hietaharju has received the government arts grant in 1997, 2001 and 2002. Markku Hietaharju is Cathedral organist in Turku where he is artistic director of Festival of international organ concerts. Hietaharju is as well active in consulting of different organ projects, new buildings, renovations and restaurations. Hietaharju  teaches organ music at the Sibelius Academy since 1986.