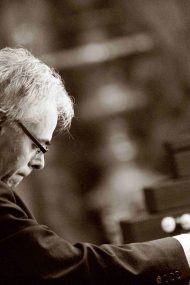 Almost immediately thereafter he was appointed as Organist and choral director of Magdeburg Cathedral, and took up his post there in August 1994. He has a busy schedule as recitalist in Germany and abroad, and is also active as a composer. From 2003 until 2006 he was also lecturer in organ at the Hochschule für Musik und Theater in Leipzig. In November 2004 he received the honorary title of Kirchenmusikdirektor.