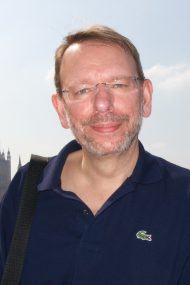 Stefan Therstam studied at the Royal College of Music in Stockholm. Organ studies with Gotthard Arnér and Rune Engsö, organ improvisation with Anders Bondeman and conducting with Eric Ericson. He finished his studies with the highest grades in conducting, theory and organ. Post graduate studies earned him a soloist diploma in organ.

A scholarship from the Royal Academy of Music gave him opportunity to study abroad, mainly with Bernhard Bartelink and André Isoir. He has specialized in organ improvisation and is one of the leading exponents of this art in northern Europe.

In 1988 Stefan Therstam was the winner of the prestigious International organ improvisation competition in Haarlem, Holland.

Since 1999 he holds the position as organist in the Engelbrekt church in Stockholm, where he is responsible for upholding the church’s highly acclaimed tradition of organ music, both in services and in the concert series.

He was appointed senior master and Professor in organ improvisation at the Royal College of Music (KMH) in 2002.

Stefan Therstam regularly performs in Sweden and abroad and has made several recordings. He has been a jury member and lecturer in several international music festivals and is also one of the founders of the new annual Stockholm international organ festival: OrganSpace.