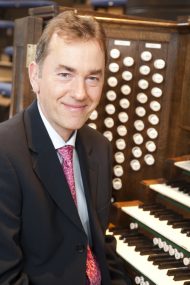 Thomas Trotter was appointed Birmingham City Organist in 1983 and was appointed Artistic Advisor and Resident Organist at Birmingham’s Symphony Hall in 2001. He is also Organist at St Margaret’s Church, Westminster Abbey. In 2002 he won the Royal Philharmonic Society Instrumental award in recognition of his outstanding contribution to classical music. He received an honorary Doctorate from Birmingham City University in 2003 and from Birmingham University in 2006. In 2012 he was named Performer of the Year by the New York Chapter of the American Guild of Organists.

Alongside his weekly recitals in Birmingham, Thomas Trotter has toured on four continents, and has played at many International Festivals such as Bath, Salzburg, Edinburgh and the Proms. He regularly inaugurates new instruments both at home and abroad, and he has recorded for Hyperion, Chandos, Regent, EMI and Decca. Forthcoming engagements include the inaugural concert of the new Flentrop organ at the Royal College of Music, London, the premiere of a new Organ Concerto by Gerald Barry in Birmingham, London and Dublin, and appearances at the new Elbphilharmonie Hall in Hamburg, Maison Radio France, and the Lotte Concert Hall in Seoul.