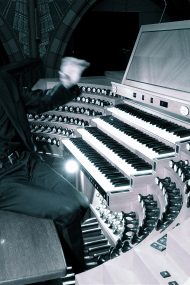 Gunnar Idenstam is a concert organist, composer and folk musician. He comes from a background of classical music, but has a “distant love relationship” with the folk and symphonic rock of the 1970s. Today he has brought these influences into the context of organ music when he builds bridges between French cathedral tradition, symphonic rock and Swedish folk music. To develop the wide-ranging music he creates and performs today he studied at the Royal College of Music in Stockholm and then studied the virtuouso French tradition in Paris, under Marie-Claire Alain and Jacques Taddei. He achieved the highest honours in both countries. In 1984 he was the first – and to date, the only – musician from northern Europe to win the prestigious international competition in improvisation, the “Grand Prix de Chartres”.