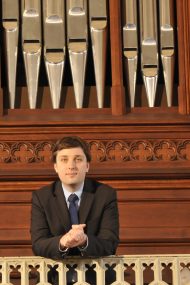 Born in Warsaw in 1980. In 2004 he graduated with honours from the Frederic Chopin Academy of Music in Warsaw in organ class (J. Grubich) and in piano class (K. Gierżod). In 2007 he completed postgraduate studies at Universität der Künste in Berlin (W. Seifen) and in 2008 Hochschule für Musik in Würzburg (Ch. Bossert).

On his initiative, restoration work was carried out on the historical organ (built by Schlag und Söhne) in the Reformed Church in Warsaw (2004-2008), where he has served as organist since 2004. Since 2012 he teaches organ, organ improvisation and liturgical playing at the Fryderyk Chopin University of Music in Warsaw. In 2018, he was decorated by the Minister of Culture and National Heritage with the “Meritorious for Polish Culture” badge.