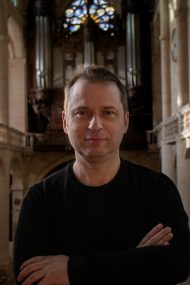 Since winning the grand prix for Interpretation at the International organ competition in Chartres, in 1992, and his appointment, four years later at the organ tribune of Saint-Étienne-du-Mont, in Paris – where he succeeded Maurice and Marie-Madeleine Duruflé along with Thierry Escaich, Vincent Warnier has earned his place as a major figure in the French organ school. Having studied at the Conservatoire national de région de Strasbourg and subsequently at the Conservatoire national supérieur de Musique et de Danse in Paris, his professors include André Stricker, Daniel Roth, Michel Chapuis, Olivier Latry and Marie-Claire Alain. He has also earned a degree in Musicology from the Sorbonne.

His discography includes 20 recordings on the Intrada label, which amply shows the versatility of his talent and received critical acclaim: Bach, Mendelssohn, Widor, Franck, Duruflé and also contemporary pieces from Éric Tanguy, Thierry Escaich or Jacques Lenot. In addition to his duties at Saint-Étienne-du-Mont, Vincent Warnier was awarded, in 1997, the organ tribune at the Cathedral of Notre-Dame in Verdun.

He regularly performs in the prestigious concert halls and cathedrals of Lucerne, Amsterdam, Tokyo, Beijing, Berlin, Barcelona, Budapest et Lyon (resident organist of the Auditorium from 2013 to 2015). Over the last year in Paris, he inaugurated the newly built organs of the Radio France Auditorium (with the Orchestre national de France under the direction of Christoph Eschenbach) and the Philharmonie of Paris (with the Orchestre national de Lyon under the direction of Leonard Slatkin). Often heard on the airwaves of France Musique, he participates in numerous programs where he shares with the listeners his musical scholarship.