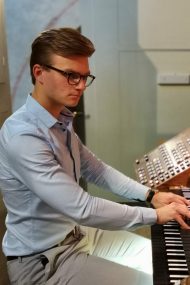 Aleksanteri Wallius (b. 1999) is a Finnish organist currently living in Helsinki. He is a first year Master student of Organ Performance at the Sibelius-Academy. Wallius was nominated as the “Young artist” of the international PoriOrgan 2018- festival. He has performed all Louis Vierne´s six organ symphonies in one day in 2020 Turku Cathedral. Along with studies, Wallius frequently performs as recitalist, orchestra member or with choirs.

In the fall of 2015 Wallius began his organ studies with Anu Åberg at the Puolalanmäki upper secondary school for music. He was accepted to the Sibelius-Academy Youth Department for school year 2017-2018 having Markku Hietaharju as his teacher. Since September 2018 he has studied Organ Performance under Mr. Hietaharju. Wallius has played recitals at renowned venues and festivals such as Uppsala cathedral, Organ night and Aria, Pori Organ (2018, 2021), Turku organ festival and Mänttä music festival.

He has attended several masterclasses with distinguished teachers around the world, such as Jean Guillou, Ton Koopman, Thierry Escaich, Balint Karosi, Vincent Dubois and Jean-Baptiste Monnot. His special interest lies in contemporary music and French romantic music. Last year Wallius premiered and recorded an organ piece called “Seven moods of a Young clergyperson” by Kimmo Gröhn, who is a finnish saxophonist and composer. Wallius is also a board member of Turku Organ festival.