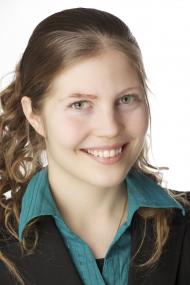 Tiina Ilonen began studying piano at the Oulu Conservatoire in 1989 and went on to continue her studies in Turku in 1991. In 2001, she started organ studies within the line of church music at Turku Conservatory and graduated as a Church Musician in 2004. In the same year, she continued with pedagogical studies at the Turku Music Academy, and graduated with a degree in Music Pedagogy in 2010.  Since autumn 2007, she has studied at the Sibelius Academy in Helsinki, majoring in organ. In spring 2010, she completed the B level exam in organ with the highest possible honours, thereby graduating with a Bachelor’s degree in Music. Currently, as part of her Master’s degree studies, Ilonen is preparing for an organ diploma at the Sibelius Academy under the guidance of Ville Urponen. Over the years, Ilonen has participated in several master classes with, among others, Kari Jussila, Olli Porthan, Jacques van Oortmerssen, Ralph Gustafsson, and Wolfgang Rübsam as instructors.

Tiina Ilonen has given concerts both in Finland and abroad, and often accompanies renowned Finnish singers and choirs. In 2006, she was named as the Young Artist of the Turku Organ Festival and in 2008 she performed in concert series at the Turku Organ Festival which presented all Olivier Messiaen´s organ works. In 2010 she performed at the Lahti Organ Festival and in summer 2011 at the Helsinki Organ Summer Festival. In Spring 2011 Ilonen was chosen as an only organ student to perform in Sibelius Academy´s Church Musician Departments 60th Anniversary concerts. She has contributed to two CD records, and has also performed in television and radio broadcasts on several occasions.  Since 2007, Ilonen has served as the secretary on the Board of the Turku Organ Festival. In spring 2010, she was appointed as the cantor-organist of the Evangelical-Lutheran Parish of Rusko near Turku.