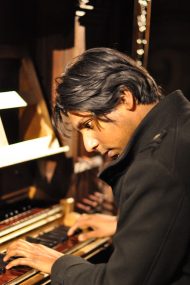 Jeremy Joseph was born in Durban, South Africa in 1978. He started playing the organ at age 9. At the age of 14 Jeremy held his first organ position at the Cathedral in Durban. After private tuition with Hans Fagius in Copenhagen, Jeremy continued his bachelor studies at the Music Conservatory in Lübeck under Martin Haselböck and thereafter completed his master degree in Stuttgart under Jürgen Essl.

Jeremy’s solo debut CD – „Organ Music at the Viennese Court“ was recorded on the famous historical organ in Klosterneuburg Monastery, Austria. In 2011 he released a recording of the complete Clavierübung III of J.S.Bach on the Silbermann organ (1755) in Dresden Cathedral. He has recorded for radio in Germany (NDR, SWR), Austria (ORF) and Hungary (MR).

Jeremy currently lives in Vienna. He is organist of the Vienna Court Chapel (Hofburgkapelle) where he regularly performs the Sunday Mass with the Vienna Boys Choir and members of the Vienna Philharmonic Orchestra. He is harpsichordist and organist of the Vienna Academy Orchestra and has performed as a continuo player with Vienna Symphonic Orchestra, Tonkünstler Orchestra, Mozarteum Orchester Salzburg, Hamburg Philharmonic, Austria Baroque Company, Aura Musicale Budapest, Musica Angelica Los Angeles, Il Suonar Parlante, Kammerorchester Basel, Balthasar Neumann Ensemble, Moderntimes_1800, Bach Consort Wien. He has performed on three occasions in the Auditorio Nacional in Madrid as soloist with the National Orchestra of Spain.

Jeremy is lecturer at the University of music and performing arts in Vienna. He teaches regularly at the yearly Austria Baroque Academy Summer Masterclasses and has been invited to teach at the Tschaikowsky Conservatory, Gnessins Academy in Moscow, the Tallinn Organ Festival, Chopin Academy in Warsaw, Belgrade Music Academy and the Music Conservatory in Geneva . In 2011 he taught organ at the Musikhochschule in Stuttgart. He is a founding member of the Ensemble Delirio.