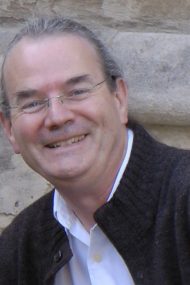 Keith John was born in Gloucester where he was a chorister in the Cathedral Choir under the Organist and Master of Choristers, Herbert Sumsion. He was awarded a scholarship to the Royal College of Music where his professors were Ralph Downes (organ), Bernard Roberts (piano) and Ruth Gipps (composition). An award by the Zürich Master Classes Foundation enabled him to study with Jean Guillou.

Keith John’s programmes are well known for juxtaposing standard repertoire alongside the less familiar and unusual; often his transcriptions of piano and orchestral music are also found in his programmes. Works such as Mussorgsky’s Pictures at an Exhibition, Tchaikovsky’s Nutcracker Suite and Brahms St. Antoni Variations have been recreated for the organ. These have been performed and recorded on award-winning CDs in churches, cathedrals and concert halls worldwide from Bordeaux, Budapest, Reykjavik, Michigan and Madrid to Shiroishi. As an occasional composer, his “Rhythmic Energy” – the conclusion of a 3 movement suite entitled ‘Time and Motion’ – has become a celebrated recital tour de force.

Reviews highlight: “his virtuoso performances… a very fine achievement” (Gramophone); “a technically brilliant performance that employs the instrument’s full range of colours and sonorities” (BBC Music Magazine); “it is frankly spell-binding from the very first note….the depth of interpretative insight shown fully justifies the endeavour, remarkable as that achievement is in itself. Do listen” (Organists’ Review).