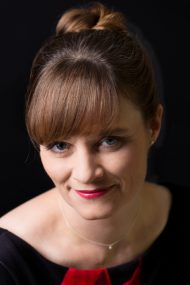 Vibeke Astner has performed all over Europe both as a soloist and chambermusician and has a very broad repertoire.

She studied organ & conducting at the Royal Danish Academy of Music in Copenhagen. Shortly hereafter she received her Concertsoloist-Diploma at the Conservatory van Amsterdam, studying with Prof. J.v.Oortmerssen. Later she has been specializing in the works by Messiaen w. Prof. Rössler in Dusseldorf and improvisation w. Prof. Dankzagmüller in Lübeck.

She has performed several broadcasts for the Danish radio & TV and won prizes in Danish Radio competitions as a chamber musician.

Her CD’s “Bach – a quiet hour”, “Danser med orglet” (transcriptions 2 organists), “Danish Romantic organ music” (played on Danish historical organs), “Les corps glorieux” (music by O. Messiaen) and “Virtuos musik fra Venedig” (chamber music) have all been received with highly esteemed credits in Scandinavia and are often broadcasted on the Danish National Radio. Next 2 CD’s are to be released in August 2019 with early music and “Danser med orglet 2”.