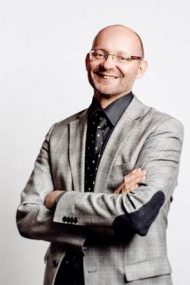 The Swedish organist Erland Hildén was appointed Organist and Choirmaster at Örgryte nya kyrka in Göteborg in 1998. His activities there include conducting major choral works with orchestra annually. Before this occupation Erland work from 1991 as assistant organist at Karlstad Cathedral, Sweden. Örgryte nya kyrka is gifted with two extraordinary good organs: A father Willis organ (1871) 3man/ped, and a from 1999 new-built reconstruction of the Schnitger organ from Lübeck cathedral (1699/1999) 4 man/ped.

Main teacher was  professor Hans-Ola Ericsson. He has also been in masterclasses by teachers like: Harald Vogel, Hans Fagius, Kevin Boyer, Jon Laukvik and Bernard Haas.

He performs organ recitals throughout Europe and has composed more than 70 works, mostly for organ but also including various other media. Four solo CD on record . Erland owns also a farm which houses a pipe organ. His native region provides inspiration for his creative work, which is fresh, contemporary, appealing, and stylistically diverse, as is evident in his performances and compositions.