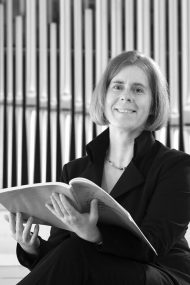 Beate Rux-Voss studied church music at the Musikhochschule (music academy) in Lübeck (Prof. Martin Haselböck) as well as organ (Prof. Daniel Roth) and harpsichord (Gerald Hambitzer) at the Musikhochschule in Saarbrücken. In 1993 she passed the concert exam (organ) with distinction. This was followed by the degree program “Historical Keyboard Instruments” at the Musikhochschule in Stuttgart (Prof. Jon Laukvik) and the continuation of church music studies in Esslingen, which she completed in 1996 with the A-Examen. She was regularly engaged as accompanist for Frieder Bernius and the Ludwigsburger Schlossfestspiele.

At the International Organ Competition in Lahti/Finland in 1989 she was the fourth prizewinner, and at the international Georg Böhm Competition in Lüneburg in 1990 the first prizewinner. Several concert tours led her through many European countries. In 2011, she performed the entire organ work of J. S. Bach on three days on four organs.

After three years working as an organist at the Friedenskirche in Ludwigsburg she acted as church musician at the Pauluskirche in Bad Kreuznach from 1996 to 2015. In February 2015 she took over a position at the Johanneskirche in Heidelberg-Neuenheim where she leads several adult and children’s choirs. As part of a teaching assignment, she occasionally taught “Historical Performance Practice” for singers at the Musikhochschule Mannheim.