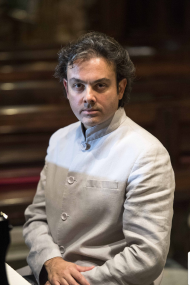 Completing his musical studies under the tutorship of world famous professors, he holds seven academic diplomas, in particular a Master’s Degree in organ performance and a Ph.D. in music analysis, four Bachelors and a Post-graduate Diploma as well. Giampaolo di Rosa boasts a vast repertoire of music from every historical period up to the present day, including the complete works of J. P. Sweelinck, J. S. Bach, C. Franck, F. Liszt and O. Messiaen.

His discography includes a number of recordings, mainly piano and organ improvisations. He has developed a personal approach to the art of improvisation, and he is dedicated to teach giving master classes all around the world, paying special attention to the field of improvisation and organ building.

Away from the concert stage Giampaolo di Rosa is founder and art director of a number of international organ festivals. Since 2008 he has been General Music Advisor for the House of Mercy at Guimarães. In the same year he was appointed titular Organist and art director of the National Church of Portuguese in Rome, where he gives concerts almost every Sunday throughout the year. In 2014 he was appointed Organist in residence of the Cathedral in León in Spain and in 2015 titular Organist of the Cathedral in Vila Real in Portugal. In 2010 he was awarded by the President of Portuguese Republic with the Order of Prince Henry the Navigator degree’s of Officer.