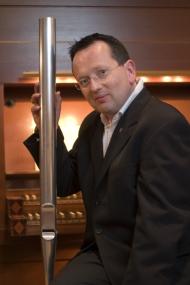 Andrew Canning is one of the leading organists of his generation. He was born in London in 1967 and studied organ with David Sanger and Christopher Bowers-Broadbent at The Royal Academy of Music. In 1984 he won first prize at the West of England Organ Festival Competition, and in 1990 he was awarded the Silver Medal of the Worshipful Company of Musicians. Following appointments at Westminster Abbey and St. Marylebone Parish Church in London, he moved to Sweden in 1991 where he served for five years as organist at the Västanfors Parish in Fagersta.

In 1996 Andrew was appointed Assistant Organist and Director of Music at Uppsala Cathedral and in 2001, Organist to Uppsala University (the first such appointment ever made in Sweden). Between 1991 and 2002 he was artistic director of  Uppsala Cathedral Boys’ Choir and lead the choir on several successful tours to Finland, Spain, and Poland. Andrew is now chiefly responsible for the cathedral’s regular recital series and the accompaniment of the liturgy in the cathedral’s daily offices.

As an organ soloist he has broadcast many times on American, Swedish and Finnish radio and television, and has performed all over Europe, Japan, Russia and the USA. He has made numerous CD recordings with artists such as Peter Mattei, Alice Babs, Nils Lindberg, Steve Dobrogosz and Anders Paulsson.

In 2010 he served as a jury member of the 2010 Miami International Organ Competition.
Andrew has performed regularly with the Swedish virtuoso soprano saxophonist Anders Paulsson since 1992. The Paulsson & Canning Duo specialize in works by J.S. Bach, Ellington, Strayhorn, Gershwin and contemporary compositions. The Duo is represented in the USA by Phillip Truckenbrod Concert Artists.