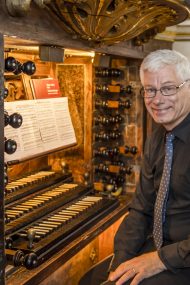 HANS FAGIUS (born 1951) has for many years been one of the most active organ recitalists in Sweden.  He received his basic education with Bengt Berg, and at the Stockholm Academy of Music with Professor Alf Linder. In 1974-75 he continued his studies in Paris with the famous organist and composer Maurice Duruflé. Besides the many recitals he regularly plays in Europe, he has toured both North and South America, Australia, South Korea and Japan.

Hans Fagius is well known for numerous successful recordings, especially on the Swedish label BIS: the complete organ works of J.S. Bach, but also a broad spectrum of music from the romantic period like Mendelssohn, Liszt, Reubke, Widor, Saint-Saëns, Karg-Elert or Duruflé. 2010 a book about the organ works of Johann Sebastian Bach that was published by Bo Ejeby förlag and in 2015 a comprehensive pedagogical edition of some works by Bach was issued on Gehrmans Musikförlag.

Hans Fagius is since 1989 organ professor at Royal Danish Academy of Music in Copenhagen and served before that for several years as organ teacher at the Academies of Music in Stockholm and Gothenburg. He is still active at recitalist, is a sought after teacher for masterclasses, and is frequently a jury member at international organ competitions. 1998 he was elected a member of The Royal Swedish Academy of Music and 2019 he received the English Royal College of Organist’s medal for his achievement as organist.